History of the Winthrop Area YMCA

Through use of minutes of the early meetings of the Winthrop Area YMCA and Recreation Department this sketch history has been developed.

In late 1980 a group of Winthrop residents began the discussion of developing a full time recreation based program. The group looked to the State YMCA of Maine, whose Executive Director Douglass K. Reed and Camp Director Larry Gardella met with the group for the first time in 1980. This group explored the possibility of the Kennebec Valley YMCA conducting programs in Winthrop, and found the YMCA reluctant to operate satellite programs in Winthrop. The group worked with the Winthrop Recreation Committee and found that neither could develop and sustain a year round program. They decided that they must work in cooperation to create a position that could operate year round. The group heard of the support the State YMCA could give the Winthrop group in getting a new YMCA started in Winthrop. A survey of Winthrop residents was taken to get an idea of the direction the YMCA should take in it’s programming. The results of this survey were that the group should focus programs of the youth of the Winthrop area.

The State YMCA in an effort to begin the program offered the services of a Camp Staff person in a part-time role to lead and direct programs. In early 1981 a letter was sent to the school department asking for their support of the idea of a full-time program. The schools gave their support in allowing the use of the facilities as long as the YMCA were to abide by all school policies. The schools also made available a space in the Grade School gym as an office for the organization.

The funding for the organization was explored through the United Way, which was already funding the South Central District YMCA which operated out of Gardiner. The local Rotary Club was also approached about funding. In early February of 1981 the first YMCA program was operated in Winthrop under the leadership of Jim Nelson, a youth basketball (YBA) program for grades 6-7-8 was held with 44 youngsters participating.

The first meeting of the Winthrop Area YMCA Board was held on February 12, 1981. At that meeting the program at the middle school was reviewed. and plans for future meetings and programs were made. The original members of the Board of Directors of the Winthrop Area YMCA were, Lehan ‘Pete’ Edwards, Chairman; Rocky Towle, Lila Segal, Ellen Guerrette, Pete Selwood, and Dick Leonard.

On May 8, 1981 at the 98th Annual State Convention the petition was read by Pete Edwards, and accepted for the creation of the Winthrop Area YMCA as a branch of the South Central District YMCA.

In the spring of 1981 the YMCA Committee met with the recreation to work towards a cooperative effort of running a summer program. It was decided the town would financially support the YMCA in return for the conducting of the summer program. As a result the program ideas of canoeing, sailing, hiking were explored for the summer of 1981, with a soccer program planned for the fall. The first year of the Winthrop Area YMCA saw 44 participants and the budget was around $6,000.00.

In 1982 funding was secured to allow for hiring a full-time director, Martin Allen who had worked on the Youth Soccer program was hired as the first director of the Winthrop Area YMCA. Marty developed several new programs within the next year including Over 35 Basketball, Adult Volleyball, Youth Basketball for grades 3-5, and with the help of Rocky Towle a ski program at Lost Valley. In the spring of 1982 Marty decided to pursue a new business he was developing and running from his home, the soon became, “Home Vision Video”. In the fall of 1983 a new director, Charlie Waddington the high school soccer coach took over for Marty. Charlies working relationship with the schools help in the growth of all of the existing programs. He also conducted the first Winthrop Area YMCA Sustaining Membership Campaign, the campaign raised $135.00. In the spring of 1984 Charlie resigned from the YMCA and left to go to Florida to pursue other interests that summer the YMCA was unable to staff the summer program.

The search for a new director began in the spring of 1984. Memorial Day weekend the committee interview Lonney Steeves, who had worked on the staff of the Northeast District YMCA in Presque Isle. Steeves was under contract with a community outreach program and could not come to Winthrop until the fall. Steeves started work on August 15, 1984 and has remained in this position until the present day.

Lonney worked as a member of the State YMCA Staff and worked on projects including Older Boys Conference, Older Girls Conference which became the Teen Leaders Conference. He also worked as a part of the staff of the Youth in Government program. These State YMCA programs were a part of staff responsibility. In 1988 Lonney was asked to become the State Youth in Government program Director, he worked for that year with Doug Reed as             co-director and has led that program until today.

Programs were expanded to have those in Grades K-1-2 involved in both the Youth Soccer and Youth Basketball programs. An Adult Basketball League was developed that had at it’s high point over 150 participants. Our Director was the soccer coach at Maranacook Middle School for two years. In 1986 Lonney started coaching at Winthrop High School as Freshman Girls Coach, then in the fall of 1987 began as High School Soccer Coach, through his career he has served a JV and Varsity Girls Basketball Coach, Track and Field, JV Softball, Ass’t to the Athletic Director, and Golf Coach.  This has helped to develop a much closer relationship with the schools, as well as giving the YMCA great exposure.

Belfast, Dover-Foxcroft, Ellsworth, Presque Isle, South Paris, Farmington, and Skowhegan. These branchs all have left the State YMCA over the last 10-12 years Belfast, Dover-Foxcroft, Ellsworth all became independent YMCA’s with facilities, Belfast is in the process of building. Presque Isle, South Paris, Farmington, and Skowhegan all went out of business because of lack of local support. The State YMCA thus became the YMCA Camp in East Winthrop, and the Winthrop Area YMCA. In 1999 the official name of the organization was changed to State YMCA Camp of Maine.

During the 1990’s the YMCA was asked to take on running the Winthrop Middle School sports. We started with Soccer, Baseball and Softball. Then added the JV Basketball teams, and from their it grew to having Field Hockey and Cross Country during the fall, the Rec Dept ran the Football program. During the winter we added Cheering, and Cross Country and Down Hill skiing, finally in the spring added Track and Field. With all volunteer coaches, and pay to play the program was very successful with large numbers of participants. In the early 2000’s the Winthrop Public Schools decided they wanted to run the programs and they were transferred back to being run by the Athletic Dept.

At that same time as the new Winthrop High School opened, the Winthrop Grade School came to the YMCA and asked if we would be interested in running an after school program. We took the idea and worked for 1 year to develop a program. The Kids Club opened and for the first year was a growing year averaging only 4 or 5 students a week. In 2010 the program had grown to seeing 16-17 per day. Janet Cowperthwaite, and Tina Cole were the original staff for the program and helped to develop the day to day program and policies that have made the program so popular.

The Winthrop Area YMCA was housed from its beginning until 2001 in the Marie Adell building as a part of the Winthrop Grade School. When that building was torn down we were given a space in the old cafeteria under the gym. After two years there we moved into the building next to Tennis Courts and stayed there until the fall of 2009 when the Winthrop Emergency Services building was vacated and the Town gave the building to the Y and Rec Dept. Our goal is to develop the bays into a teen and community center.

In 2013 the Winthrop Area YMCA and Winthrop Rec Dept collaborated to create the "We Play Outside" programs.  Margy Knight was hired to coordinate the program.  In the first year along with creation of the new logo, a bike safety rally, a paddleboard tryout day, a 5K race for families, a special day of Dog Sleds and horse drawn carraige rides, and a day of snowshoeing, and dog sled rides.  Speaking of snow shoes they purchased over 30 pairs and allowed people in the community to use them at no cost.  They have become very popular with Grade School and Middle School classes, scout troops, and family outings.

Our youth sports have expanded with older age groups getting involved in Travel in our Soccer, Field Hockey and Basketball programs.  Soccer play in a local league with grades 4-5-6.   Field Hockey for grades 3-4-5-6.   In 2013 we had 10 travel teams including boys and girls in grades from 3-4 to 7-8. Over 100 kids participated in this year’s travel team program. 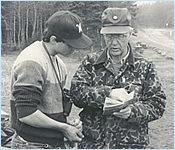 "In memory of Lehan 'Pete' Edwards, from his friends
and family"